1. Write the numbers in their expanded form. Write them also as fractions. The first one is done for you.

2. These numbers have also hundreds, tens, and ones. Write the numbers in the expanded form. Follow
the example.

3. Write the decimals in the place value charts, and as fractions.

5. Fill in with the kind of parts you get.

6. Write the decimals indicated by the arrows.

8. Write the fractions as decimals.

9. Write as fractions or mixed numbers.

10. What number is formed from the "parts"? Give your answer as a decimal.

11. Ten tenths makes one whole. We can write that as a multiplication: 10 × 0.1 = 1. (Note: the word
“makes” corresponds to the equal sign, but there is no word to correspond to the multiplication sign; it is
implied.) Fill in the sentences below, and write a multiplication sentence to match each one.
Hint: The picture of the large square in the first page of this lesson can help.

12. Use the place value chart to help you, and write the decimal that is....


This lesson is taken from Maria Miller's book Math Mammoth Decimals 2, and posted at www.HomeschoolMath.net with permission from the author. Copyright © Maria Miller.

A self-teaching worktext for 5th-6th grade that covers the four operations with decimals up to three decimal digits, concentrating on decimal multiplication and division. The book also covers place value, comparing, rounding, addition and subtraction of decimals. There are a lot of mental math problems. 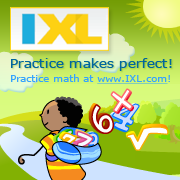